I was playing around with prime numbers when I noticed that one of the implementations was several times faster than the other one.

instead of the uglier

Here the benchmark results for the two loops (running on a 2.7 GHz Intel i7): 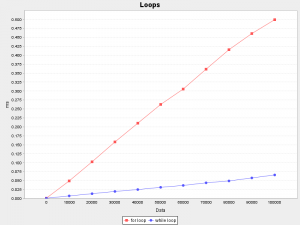 Looks like the for loop is about 8 times slower than the while loop.

I will still use the for loop where speed does not matter, since it is more concise, but where speed matters I will use the while loop until further notice.

This entry was posted in Development, Scala. Bookmark the permalink.